Everything You Need to Know Bipolar Disorder 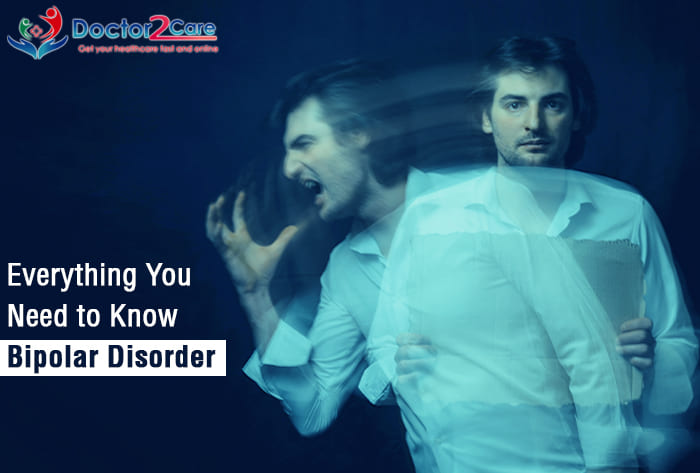 It is not possible that a person is not thinking about something or hasn't had a past traumatic experience. When an experience or a thought goes beyond the person’s control and is often seen to come back with time, the person might be suffering from a mental illness.

It is seen that many people across the world have mental health issues from time to time but they are not aware of it.

Mental illness, which is also called mental health disorder, has a wide range of conditions that affect one’s mood, thoughts and behaviour. Instances of mental illness include depression, anxiety disorders, schizophrenia, bipolar disorders and addictive behaviours and many more.

A mental disorder, mild or severe, could make one feel miserable and lost. It can cause problems in the daily lifestyle, schedule and behaviour. It can harm work or studies or even a relationship. In most cases, symptoms can be managed with a combination of medications and talk therapy.

You can go for the online doctor consultation in India via Doctor2Care, an online portal that helps patients with video consultation with India’s top doctors.

This blog will give you an insight on Bipolar Disorder, its symptoms and treatment so that you can easily figure the cause and what usually goes on when someone suffers from the disorder.

What is Bipolar Disorder?

Bipolar disorder is a disorder that is caused in the brain which happens to cause changes in a person's mood, energy, behaviour and ability to function.

People suffering from bipolar disorder go through intense emotional ups and downs and severe mood fluctuations that typically occur during intervals of the days and weeks which are termed as mood episodes. People with bipolar disorder can also have periods of ‘ not feeling anything’ which is a neutral mood.

However, these mood fluctuations typically last for hours rather than days. Also, these moods are not necessarily accompanied by the extreme degree of behavioural change. Such people face difficulty with daily routines, time management and social interactions depending on the severity of the disorder.

Bipolar disorder can disrupt a person’s relationship with loved ones and cause difficulty in simple tasks like getting out of the bed, working or going to school.

Depending upon the severity and the major changes in behaviour, Bipolar disorder has three different diagnoses.

People with Bipolar I disorder experience a manic episode. During the episode, the person experiences an extreme increase in energy level, may feel he or she is on the top of the world ,get very depressed or might feel uncomfortably irritable in mood in distinct periods.

Some of the common symptoms of Bipolar I Disorder are:

Since bipolar disorder causes serious disruptions in a person’s lifestyle and creates a stressful situation. Medication is the main source of this disorder’s treatment.

Even though talk therapy can help a lot of patients, it is necessary to adhere to medications.
Medications, namely lithium, mood stabilisers are the most commonly prescribed medications for bipolar patients. These medications are believed to correct the balance of brain signalling.

The symptoms of this disorder are the same as Bipolar I Disorder. But here you can notice a little change of the symptoms.

Cures for bipolar II are similar to those for bipolar I. It involves medication and psychotherapy. Medications such as antidepressants and mood stabilisers.

Cyclothymic disorder is a milder version of bipolar I and bipolar II.  It involves mood swings with hypomania and depressive symptoms that may happen frequently.

The treatment for this disorder is the same as the other two. Talk therapy and medication. To understand better, you can for an online doctor consultation in India.

Certain mental conditions tend to run in the families, like Bipolar disorder is generally passed down by the family. Having someone who is closely related to you with this  disorder could mean you are prone to risk. If a family member has a mental disorder, it does not necessarily mean you will develop one.

Other types of disorders could be caused by past trauma, stress and family pressure. Be it for whatever reason always consult a doctor.